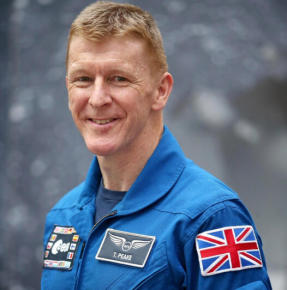 British Astronaut, Spacewalker & Out of this World Motivational Coach

Engage & Inspire for Success
The Remote Leader
Realising Your Potential

Tim is a former Apache pilot, flight instructor, test pilot and current European Space Agency astronaut. A veteran of eighteen years military service, Tim has flown over 3000 hours on operations worldwide. In December 2015, Tim became the first British astronaut to visit the International Space Station and conduct a spacewalk during his six month mission. He also ran the London marathon from space. Tim's mission engaged more than two million students in outreach activities. He is an ambassador for STEM education, The Prince's Trust and the Scout Association. He is a best-selling author, with proceeds from his books donated to The Prince's Trust. If you or your team are in need of some inspiration before a big launch or require a little firing up by a man who has travelled 22 times the speed of sound, then an out of this world motivational fix with Tim is just a few clicks away.