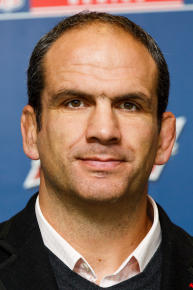 Captain of the World Cup winning rugby team in 2003, Martin is one of the world's greatest ever rugby players, A true leader both on and off the field of play, Martin was the only man ever to have captained the British Lions on two separate tours, the first to South Africa in 1997 followed by Australia 2001, as well as the first player from a Northern Hemisphere side to captain his band of brothers to a World Cup triumph over Australia in Sydney. This victory rode the success from earlier in the same year, when he took his side to their Grand Slam victory in the 2003 Six Nations Championship, their first Grand Slam success since 1995. Martin’s stellar career was honoured by the Queen in 2004 with an OBE, and in 2008 he was appointed to the position of England Manager, which he held for three years. Now a respected sports pundit and keynote speaker, level up with a hero of the game if you’re looking for a grand slam double dose of inspiration and motivation from a man who knows what it takes to battle with the best and come out on top.