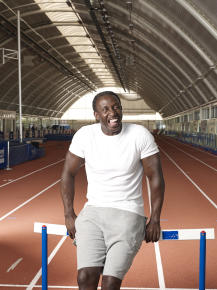 Get Ready, Get Set, Get Success
Keeping Calm Under Pressure
Motivating the Team

When it comes to the 100m, Linford is undoubtedly Europe’s greatest ever star to grace the track. At the 1992 Barcelona Olympics, while Freddie Mercury showed he had the pipes on him to compete with Montserrat Caballé, Linford showed he was in a class all of his own as he won gold in the 100m. In an International career spanning seventeen years, Linford competed over 60 times for his country and won more major championship medals (23 if you’re wondering) than any other British sprinter. Linford is the only British athlete to have won Gold medals in the 100 metres at all four major competitions and was the first European to have run sub ten seconds. His fastest time 9.87 seconds, recorded when he won the 1993 World Championship in Stuttgart, was the European record. Linford’s success in athletics has continued since his retirement in a coaching role, having coached a number of top athletes to success including Olympic medallists Darren Campbell, Katharine Merry, Mark Lewis Francis and Commonwealth Gold Medallist Laura Turner. Super quick, super inspirational, and super keen to provide the motivation that you might need to achieve your goals.