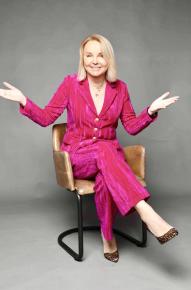 Described by Piers Morgan as “The best trans role-model in Britain”, India is a journalist and well-respected TV news reporter and presenter. In 2018, India was granted full celebrity status in the tabloids after appearing in Celebrity Big Brother. Witty and controversial, India is never far from the headlines and broke new ground in broadcasting by becoming Britain’s first transgender Loose Woman - and the world’s first transgender television newsreader for Channel Five. Before India became a household name and prior to transitioning, India very nearly became a professional footballer, trialling with football league side Carlisle United. But the Cumbrians' loss was our gain with India proving to be one of the stand out journalists in her field, interviewing the likes of Priscilla Presley, Jonathan Ross, Caitlin Jenner, Tony Blair and even the ol’Iron Lady herself, Maggie Thatcher. India’s motto in life is ‘It’s never too late to change your life’ and if you want to take the first steps to making big changes in your life, be it at home or in the workplace, or looking to bring a more diverse culture to your business then it’s time to level up with India.