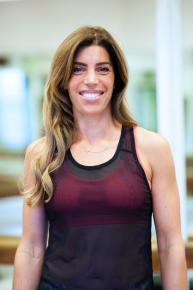 Staying Fit with a Busy Schedule

Vicki is one of the UK’s leading fitness experts and award-winning founder of London’s original barre and ballet studio, Barreworks. It is here that she has carefully created and crafted an entirely unique barre fitness programme over the past 10 years attracting a dedicated following of athletes and corporate clients. Vicki believes that every sport and every individual keen to improve their performance or movement patterns can learn a tremendous amount from the discipline of ballet. Despite being known for her training skills at the barre, it was climbing up jagged rocks and jumping into ice holes on Channel 4’s SAS: Who Dares Wins, where Vicki took centre stage. Vicki reached the final of series four and became one of the first ever females to qualify for the programme. Since her participation in SAS: Who Dares Wins, Vicki has become highly sought-after on the speaking circuit following her Ted X talk ‘Why fear is a choice’. She has become an advocate for women’s resilience, grit and determination - something she will be relying on as one third of 'Girls Who Dare’, 3 women who will take on the challenge of rowing 4000 KM across the Pacific Ocean from San Francisco to Hawaii in June 2021. If you’re looking for that motivation to reach your full potential, then it’s time to take the plunge with Vicki.