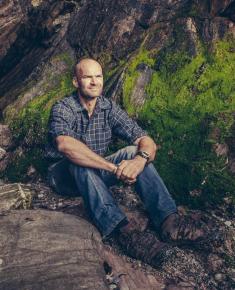 Monty is an ex-Royal Marines Officer who worked for Nelson Mandela during the peace process in the early nineties. Monty left the Marines to pursue a career in expeditions, travel journalism and biology, becoming a qualified marine biologist. He is also the President of the Galapagos Conservation Trust.

Monty has been awarded the Bish Medal for services to exploration by the Scientific Exploration Society. He led 1 multinational team to the discovery of a sunken city off the Indian Coast; led 3 expeditions to investigate poaching activity in Malawi and 1 expedition to South Africa to look for evidence of prehistoric settlements in cave systems.

Monty caught the eye of television producers when being head-hunted as a competitor in the flagship Channel 4 show ‘Superhumans’, a test of elite performers. Monty won this competition, and was in demand to present further series for Channel 4, National Geographic, the History Channel, Channel 5, and the BBC.

He is best known for his three BBC2 series ‘Great Escapes’, where he lived on the west coast of Scotland and Ireland with his dog Reuben. He also presented the multi-award winning series ‘Great Barrier Reef’ and Channel 4’s ‘My Family and the Galapagos’. For the Discovery Channel, he worked on the ground-breaking expedition series ‘Lost Worlds’.

Monty has written several books, and is a regular contributor to magazines and newspapers, many of them communicating his enthusiasm for the natural world. He is also an Ambassador for various conservation groups and was awarded an honorary Doctorate by Plymouth University. Monty is an experienced speaker, drawing on his experience in leadership and teambuilding, and his tales of adventure.