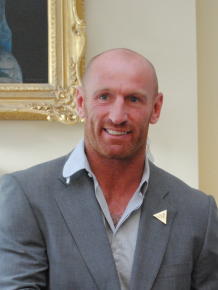 Not only is Gareth one of Wales’ most memorable former international rugby stars, the versatile matchwinner has proven to be a huge influence to thousands off the pitch too. Gareth announced that he was gay in 2009 and became the first openly gay professional rugby union player in the history of the game. Ever since that announcement was made, he has worked tirelessly to break the stigma surrounding being HIV positive too. His impact on the pitch saw him become Wales’ second highest try scorer in the country’s history with the big guy notching up 100 caps for his country and winning the Grand Slam in 2005 too. Away from the sport he loves, Gareth has made influential contributions as an LGBT advocate, being named the Most Influential Gay Person in the UK 2010 by The Independent and Stonewall’s Hero of the Year for his work. The focus of the documentary ‘Gareth Thomas: HIV and Me’ Gareth further aimed to reduce the stigma around HIV positive status, and his honest account in the book ‘Proud’ won him Sports Book of the Year 2015. An engaging mentor and speaker, if you’re looking to inspire your team to educate them about diversity and inclusion, then level up with the legend that is Gareth Thomas.