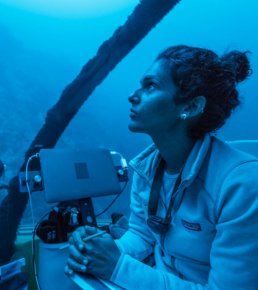 Diva Amon researches the weird and wonderful animals of the deep ocean and how our actions are impacting them. She has participated in expeditions around the world, exploring previously unknown deep-sea habitats from Antarctica to the Mariana Trench, and journeying down into the deep herself. Sharing her science with the public, fellow scientists and policymakers is of the utmost importance. She has recently spoken at the United Nations, International Seabed Authority, and the Nobel Prize, as well as filmed with the BBC, Nat Geo and CNN, to name just a few.